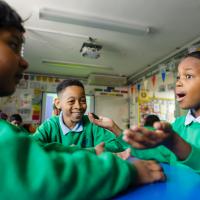 These exciting, free online workshops are for Ealing parents/carers and their children to attend.

The sessions are open to all families who have children attending an Ealing early years setting or school, or who access a local authority service or local community organisation.

Schools are asked to circulate the flyers below to parents/carers.

The Jamaican Men on the Empire Windrush - What Happened Next?

This session will detail what happened to the group of Jamaican men who were filmed arriving at Tilbury docks in 1948. It will detail life on board the Empire Windrush and the other passengers. In addition, the housing and employment outcomes of the Windrush generation in general will be discussed and their contribution to Britain’s war effort and the rebuilding of Britain the 1950s and 60s.

This session will be offered on the following dates:

This interactive whistle stop presentation provides a potted history of Black Peoples’ presence in the United Kingdom starting from the Roman Empire and incorporating the Tudor, Georgian, Victorian eras and the arrival of the Windrush generation up to the present day.

The presentation includes aspects of British race relations and its impact on Black and White communities and covers the race riots in the 1950s and the national uprisings during the 1980s.

Please note: this workshop is a repeat of the one delivered in February 2021

This session will be offered on the following dates:

These sessions are funded by the Windrush Day Grant and will be delivered by Oshun Education online via Zoom.

To register parents/carers are asked to email trainingsupport@ealing.gov.uk with their name, school and details of the workshop(s) they would like to attend.